Large rural estates have a pivotal role to play in easing Britain’s rural housing crisis. As Devon’s largest private landowner, supporting the growth of sustainable communities has driven our business approach for generations.

Statistics published by the Institute for Public Policy Research show the average rural house price is around £87,000 more than the urban average and just eight per cent of housing stock is affordable compared with 20 per cent in urban areas.

In the 1800s landowner Mark Rolle, the current Lord Clinton’s predecessor, was behind the building of many farms and cottages which still define the character of East and North Devon today. His legacy lives on in Clinton Devon Estates (the Estate), a land and property management company responsible for 25,000 acres, run by a professional estate management team who promote and support sustainable development, a vibrant rural economy and space for nature and recreation.

Leigh Rix has been Head of Property and Land for Clinton Devon Estates for more than a decade and explains that the Estate’s business approach is all about producing a balanced scorecard. He says: “The family, trustees and executive team at the Estate believe that it’s not only possible for landowners to be part of the solution to the rural housing crisis, but that it can be done in a way that supports society and respects the environment.

“With the government’s pledge to build a million new homes in the next five years, there’s a real opportunity for rural landowners to promote responsible development.

“A sustainable community is one that respects the history and landscape of a location, while incorporating features to meet the population’s future needs and we need to be providing the right kind of homes in the right places for a variety of ages, needs and incomes.

“We regard our developments as legacy projects, and the team keeps a close eye on the quality, design, energy efficiency and connectivity of all new homes built by the Estate. What one community needs may be different to another, so we place great emphasis on fully understanding their priorities and concerns.” 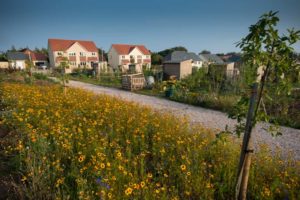 A scheme for 48 homes in the seaside town of Budleigh Salterton near Exeter came to fruition in 2015, delivering 40% affordable housing including social rented and shared ownership. From the outset of the project the Estate team formed a partnership with Cornerstone Housing Association to ensure the proposals were developed around the needs of local residents.

Leigh Rix recalls: “On day one of the public exhibition, the first people through the doors of the Public Hall at 9 o’clock were young parents keen to know how they could put their names down for one of the affordable new homes.”

Providing affordable housing was central to the project in a town renowned as much for its Arts and Crafts architecture as it is for its attraction to retirees. But there was a sticking point. The proposed site was situated on land used for allotments which the Estate had leased to the town council for many years.

Initial concerns were alleviated when a much-improved and expanded network of fruit and vegetable patches, were included in the masterplan for the two-and-a-half-acre site. The number of plots were increased from 56 to 87, reducing the long waiting list for allotments, and brand new sheds and water supplies were also installed as part of the refurbishment.

“A collaborative approach allows people to air their opinions and helps us to shape the best possible scheme. While a final plan is unlikely to be able to incorporate all views expressed, it will usually adopt quite a few, and informs the overall masterplan,” explains Leigh Rix. The Horizon development went on to win the national What House? Award for Best Partnership Project recognising the efforts of the Estate, the affordable housing provider and the Devon-based homebuilder Cavanna Homes.

The Estate team is keen to support its communities wherever possible, and when parish councillors in the East Devon fishing village of Beer –  Channel 4’s Village of the Year runner-up in 2018 – issued a call for land for new homes, a Clinton Devon Estates plot was selected by local residents in the Neighbourhood Plan. The site is adjacent to 10 homes, on land provided to English Rural Housing Association by the Estate in 2004 for affordable housing for local people. There will be 30 new homes on the new development in Beer, 13 of which are being allocated as affordable.

On a much larger scale, Plumb Park in Exmouth is a 264-home joint venture with homebuilder Taylor Wimpey, delivering 25% affordable housing through social housing provider Live West. It is the Estate’s most ambitious development project to date and is designed around a hilltop park, known locally as Donkey Hill. The scheme incorporates space for allotments and orchards and provides pedestrian and cycle links, connecting the development to the town, a retail and business park and the coast. It will produce a biodiversity net gain through new hedgerows, wildlife corridors and extensive grass planting.

Clinton Devon Estates’ development company Littleham 2010 speculated over half-a-million-pounds on surveys and reports to inform a planning application to East Devon District Council, without any guarantees of winning consent. Leigh Rix recalls: “Planning consent was granted in 2015 and the first homeowners moved-in in 2018. It was a long and costly journey from concept to delivery and it takes a strong vision, determination and a professional team to stay focused on the goal which has always been to deliver a legacy project that will contribute significant social and ecological benefits.”

During the early design phase of Plumb Park, the Estate and their urban designer John Baulch from LHC Design produced a masterplan to compliment the much respected neighbouring streets known as The Avenues. Leigh Rix and John Baulch still work closely with the developers to ensure the design code is delivered and, as with other Estate developments, the affordable homes at Plumb Park are indistinguishable from those on the open market.

In contrast to East Devon, the housing need in the North Devon village of Merton was for smaller properties for the retired generation. The Estate responded by building four, two-bedroom bungalows to enable some of their long-standing tenants to downsize into comfortable, manageable homes, while freeing up some larger properties for families. 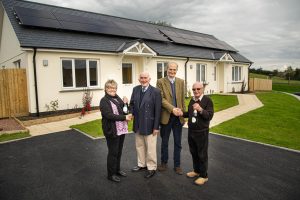 Although the Merton homes have been retained by the Estate, generally the team acquires the planning consent for its schemes and, either sells the sites with consent to local housing developers, or looks for a joint venture agreement. When contemplating schemes, landowners and developers alike must work within the parameters set by local authorities which determine the percentage of affordable homes required. Back in East Devon, for example, in Sir Walter Raleigh’s home village of East Budleigh, the council specified that a site recently put forward by the Estate requires 66 per cent affordable housing, resulting in planning consent for three social homes and two open market properties.

Ideally, the Estate would like to prioritise rural key workers, such as those in agriculture, forestry or conservation, for its rural affordable housing, but it does not have the freedom to select its tenants on new developments where the affordable housing allocation is agreed as part of a planning consent.

Leigh Rix concludes: “While the Estate’s trustees would like to provide much more affordable housing for rural key workers, the current rules inhibit us from doing so. Britain’s rural communities will only be truly sustainable if we can prioritise rural affordable housing stock for those who also work in the countryside.”