A core component of the Royal Marines’ close combat training will return to the East Devon Pebblebed Heaths near Exeter this spring.

Since the 1950s live grenade throwing has taken place at a purpose-built range on Colaton Raleigh Common by Royal Marines based at the nearby Commando Training Centre (CTC) in Lympstone.

Weather damage and erosion at the site prompted Ministry of Defence (MoD) officials to close the range in 2015. The MoD has now announced plans to reinstate the training activity following a £250,000 restoration of the range which will include the replenishment of specialist layers of stone and repairs to a number of small buildings and the perimeter fencing.

Work commenced on Monday, February 11, and is scheduled to take around five weeks, with grenade throwing returning to the recruits’ training programme this April.

The MoD is working closely with landowner Clinton Devon Estates and the Pebblebed Heaths Conservation Trust, which manages the area. The range is situated within the 1,100-hectare network of linked heaths which are home to more than 3,000 species of flora and fauna and protected by national and European designations, so the work is being closely monitored by Natural England.

Andy Cross, Defence Infrastructure Organisation Training Safety Officer for the Woodbury Common training area, explained that due to the high-risk nature of light weapon training and the range’s environmentally sensitive setting, only a particular type of stone is suitable at the range site.

“Different layers of stone make up the impact area of the range,” he explained. “But it has to be a particular type of stone which not only minimises the impact of the explosions, but, if a grenade fails and must be manually detonated by someone going right up to the device, it must absorb the impact of the person’s approach and not cause a ripple of movement and disturb the grenade, which could set it off.

“Not only this, but the stone must be ecologically compatible with the heathland, and this particular stone doesn’t come cheap, so it’s only now that funding has become available for its replenishment.”

Grenade training is an operational requirement for the Royal Marines and as close combat warfare has increased, so has the use of grenades on the frontline. Mr Cross added: “To be able to have the option of using a grenade in a real-life scenario, military personnel must have experienced throwing a grenade on a purpose built range so they understand the principles of what they’re doing before they go into a tactical scenario, so training facilities like Colaton Raleigh Common are crucial to progressive military training.”

During the closure of the range recruits travelled to ranges in Wiltshire and South Wales to train, so its restoration will reduce transport time and cost. Devon based Territorial Army units are also due to use the range for the first time.

Kim Strawbridge, Pebblebed Heaths Site Manager, added: “Military training on the heaths dates back to the Second World War when Dalditch Camp was a major military encampment. The Royal Marines operating out of CTC follow strict orders regarding how they operate on site and the MoD is respectful of the environmental sensitivities of the heaths and their obligation to operate appropriately.”

Updates on the progress of the refurbishment works will be issued periodically by both the Defence Infrastructure Organisation, the Pebblebed Heaths Conservation Trust and Clinton Devon Estates.

Once reinstated, live throwing will take place over a maximum of two days a fortnight and no more than eight times per calendar month, with all detonations occurring in daylight hours between 9am and 4pm.

Formal notification of firing dates and times will be published on www.gov.uk/government/collections/firing-notice a minimum of one month before activity is scheduled to take place. The legal conditions for this type of military training activity are set out in the Ranges Licenses and The Woodbury Common Range Byelaws, copies of which are published on noticeboards positioned on all approach routes to the Range Danger Area. 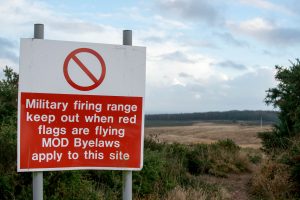